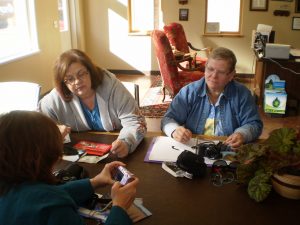 This year the board decided to find out what programs the community found the most important and the most helpful. A survey was developed and sent out to Main Street members and volunteers and social media in March and April.

The survey had 24 questions with multiple choice answers. There were 149 people who took the less than five minutes to answer the questions. This is the last article in a series of five on what the surveys revealed on the opinions from the community.

It is obvious from the recent online survey of Main Street Guymon programs that the board, director, and volunteers need to work better at getting the word out about opportunities offered to the membership and public.

Currently, Main Street Guymon posts community events and Main Street programs on their Facebook page that has 4,800 likes and 10,000 to 25,000 post reaches each month.

“But there is a fine line in over – posting and causing people to hide your posts,” says Main Street Guymon Director Melyn Johnson. “And so, in the interest of not losing followers, we try to not post the same thing over and over and we might miss some who don’t see Facebook as often. We also post community events coming up that are not part of Main Street Guymon because our followers want to know more than just the Main Street events.”

The “On the Bricks” personal column has been written by Johnson since 2010 and usually includes a run down of community events that are coming up. The column runs weekly in the Guymon Daily Herald and is posted on the web at www.MainStreetGuymon.com. The column had a 77% positive rating in the survey and 19% who were not aware of the column. One comment that probably fell in the 4% that don’t find the column to be a positive for Main Street Guymon said, “Many find the ‘On the Bricks’ offensive or as if they are being lectured.”

Another said in the comments, “Do enjoy the newspaper column with the thought – provoking stories.”

PTCI films an “On the Bricks with Melyn” show that shares upcoming events, information from classes that have been offered, or a visit into some of the Main Street member businesses. These are available on YouTube and are shared on the website and on social media.

“We do what we can with only one full – time person and volunteers on a limited budget,” says Johnson, “but I wish we did a better job of getting our message out. It is something that takes a lot of time but is necessary.”

The only Main Street Guymon program that received a low approval rating was the Archaeologist Lecture in October, with brought home a 36% like and a high 32% that didn’t know about it.

“This is a program that has a smaller interest group,” says Johnson, “sort of a niche market and we held it each year because there was no cost to us, and it was a part of our Main Street Month and part of Oklahoma Archaeological Month. But with the low rating and the fact that it takes place off Main Street (at the public library), we’re going to take it off our annual schedule of events. I have contacted the library to see if they’re interested in continuing the program through the library.”

Of interest are some of the comments at the end of the survey. Because of comments about people not knowing about the programs, we are going to work to post on our website each program, a short description, and how to get involved.

One person said, “A listing of all committees needs to be spread widely to inform people with what all they can choose to volunteer in. I think many more people what to be involved, they just don’t know how or when they can step in to participate!”

“Doing things like this sounds easy,” says Johnson, “but it takes a lot of hours to gather the information and get it set up. Then doing the updates is a chore, but I think it is needed and we are going to do our best to provide the information. For a long time, people have been coming into the office and finding out ways to help in the community and this is just a step further to make it official. What I know is that we want our community to have these programs, whether it is Pioneer Days (through the Chamber of Commerce) or Panhandle Partners (who help families battling cancer) or Iron Thunder (whose brings us the Five State Motorcycle Run with all proceeds going back to help people in the community) or the Ultra Runners (Livin’ Green and other runs who promote a healthier lifestyle), or Scouts or 4-H because they make a better community.

And so, we will work to help all these programs find people interested in working as a volunteer with them … including the Main Street Guymon programs and partnerships.

“They no longer need our help from the Main Street Guymon office,” says Johnson, “but they continue to increase their prominence in the community through their volunteer work and we are proud of what all they’ve done.”

One survey comment read, “I would like to see a food program where community members could donate canned goods and other non – perishable items year – round, but also include an annual program where sportsmen and women could donate venison and other game meat to families in need.”

“Loaves and Fishes has been our local food pantry in Guymon, a 501c3 organization, since 1990,” says Johnson. “They do a fantastic job. In fact, they served 55,584 individual visits in 2018. Yet, I don’t know that they had ever considered taking game from hunters and I am anxious to share that idea with Loaves and Fishes Director Gail Parsley.”

The City does have a beautification project, a streetscape, for the downtown blocks under consideration now and they hope the community will follow that work and give their thoughts into that when the public meetings come up soon.

Another comment at the end of the survey, said, “I think we need an annual fundraiser for the senior home to give more to our very bored seniors. They deserve more than can be afforded.”

Heritage Community staff work to have activities at the assisted living and nursing home. “They also have volunteers who can help make these ideas happen and I encourage whomever wrote this to join them and work to add more,” said Johnson.

The comment also said, “The high school needs dance Fridays at $3 a child as a school fund raiser.”

Many of the comments were positive and showed appreciation for the Main Street Guymon volunteers and programs. “You guys are awesome,” said one on the survey. “Keep up the great work. I have only been here for a few years, but I am proud to say I am from Guymon!”

Another said, “Main Street Guymon is a great connector for the community. If they were to go away, there would be a very large void to be filled.”

And for that sentiment alone, those who work as a part Main Street Guymon say, “Thank you. We hope our programs today, and in the future, hold true to our mission and to always remember that we are all about making lasting relationships, one handshake at a time.”