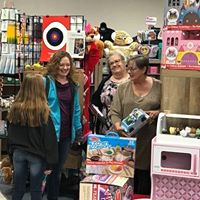 This year the board decided to find out what programs the community found the most important and the most helpful. A survey was developed and sent out to Main Street members and volunteers and through the Main Street Guymon Facebook page during March and April.

The survey had 24 questions with multiple choice answers. There were 149 people who took the less than five minutes to answer the questions. This is the fourth article in a series of five on what the surveys revealed on the opinions from the community.

The health of local retail is one of the top two priorities in the national Main Street program. Recent retail events and programs and how they fared in the Main Street Guymon Program survey of the community is interesting. The highest ranked retail program is the Main Bucks with a positive 79% and 19% who don’t know about it. That leaves 2% saying they don’t really think it is a good move.

Main Bucks are sold in $10 and $20 increments and can be traded, like cash, with over 30 Main Street Guymon business members. So, the Bucks work like a gift card, but can be used 30 different places. Bucks are often used as gifts and contest awards or for customer appreciation.

“Main Bucks are what we give our Main Street Vital Volunteers and what we draw each month at the Cash Mob,” says Main Street Director Melyn Johnson. “This is a good example of how they’re often used. We know that when we give that $20 to someone, it is used here in Guymon. We have had a winner of Main Bucks from Oklahoma City once who said she needed to go shopping before she went home. If it had been a $100 bill, it would have likely been spent in OKC. And it is a way that we continue to support those who support us because we’re steering them to shop in our member stores and the tax revenue from them goes to our community.”

The Breakfast and Business at BOP program has a 76% rating on the survey. These are business classes set up to help our business owners and managers and those of the future to learn more, helping them to be more successful. The classes are free, and the Bank of the Panhandle schedules the classes and provides a breakfast with them. The classes are open to everyone, not just Main Street members and not just BOP customers.

Anyone who has a topic they would like to see covered in these business sessions, should contact Sally Hawkins at the bank or Melyn Johnson at Main Street Guymon.

The Career Focus program is a professional development workshop that takes eight Friday mornings and has local presenters teach individuals how to develop their professional skills. This program starts in September and ends the first Friday in November. It is open to 15 people and is entering it’s fifth year. The cost is $250 per person.

“We learned that it was very expensive to attend a professional development course because the workshop plus travel and rooming is a big expense,” explains Johnson. This ends up costing several thousand dollars and not all companies can justify doing this for their employees who would like to become better managers.” So, the committee looked at many different courses offered nationwide and drew together a workshop using primarily local sources who teach their segment of the program as a volunteer. This kept the cost very affordable. And with it only taking a half day a week out of the office, it also is easier for the business to be able to do than sending someone for a week – long program.

“I believe the program helps our businesses in several ways and I’m proud of the session leaders we have who are kind enough to share their expertise. Through this program we have gained some real Main Street backers. Two of our current Main Street Guymon board members started their involvement with the organization with the Career Focus program.

The Main Street Guymon board of directors is proud to continue offering this educational and networking opportunity to local businesses and their employees.

The Lunch and Cash Mob programs brought in a 72% and 71% positive vote with 24% of those surveyed saying they didn’t know about the programs. Each mob is comprised of volunteers who go once a month to a retail establishment (the cash mob) and to restaurants (lunch mob) who are Main Street Guymon members. The cash mobsters promise to spend a minimum of $20 at the store and often find themselves going into stores that they have not previously shopped. Same with the restaurants, where the mobsters order off the menu and buy their own lunch.

“It can be an adventure,” says one mobster. “And it is fun. It doesn’t take much time and it is a way to support your local businesses.”

“The suggestion is one that I’m going to do my best to follow with the Cash Mob,” says Johnson. “But with the Lunch Mob I found that when others saw we were going to a restaurant, they would avoid it, in case we took in a large group. So, I quit posting because I sure didn’t want to have the mob to hurt their business! We do need to do a better job of recruiting mobsters,” says Johnson. “And I need to do a better of job of communication with our mobsters. What would be ideal is if we had a volunteer in charge of this who isn’t as scatterbrained as I am.”

The mob programs cost Main Street Guymon $20 a month to have, because there is a drawing each month at the cash mob for a $20 Main Bucks. It is an obvious benefit to the member businesses, but another aspect is when someone wants to get more involved and meet new people in the community, this is a fun and easy way to do it.

The survey asked the public their opinion about a new program the board has decided to offer, a Start Your Own Business class. The class is six weeks long, meeting once a week in the evenings and will start in January of 2020. There was a 68% of the survey takers who that this was a good idea. Thirty percent said they didn’t know about it, which makes sense since it hasn’t happened yet.

The lowest scoring retail program was the Mystery Shopper. For this, a member business can work with the director on putting together a questionnaire that unknown volunteers fill out after visiting the store.

“We have a basic shoppers form that the business owner / manager and I rework to answer the questions that they would like to find out about their business and their employees,” says Johnson. “Then I share it with locals who go into the store and then fill out the form, giving a critique of their experience. This is a program that is offered to our businesses at no charge. After five to ten shoppers fill out their forms, I compile the responses and send it to the owner / manager.

“There are several reasons that this is a good program, in my opinion. First, you have at least five people go into your business, which is an opportunity to sell to them, or at least to make a positive impression. You also have the chance to find out what improvements you can make so that there are more positive impressions than before.

“We can always improve. And this is another program where there is no cost on the budget.” This is a program that is used whenever a business owner expresses an interest to have it done.