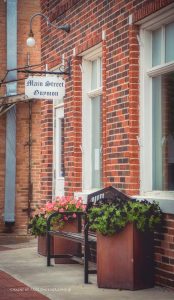 This year the board decided to find out what programs the community found the most important and the most helpful. A survey was developed and sent out to Main Street members and volunteers and through the Main Street Guymon social media during March and April.

The survey had 24 questions with multiple choice answers. There were 149 people who took the less than five minutes to answer the questions. This is the third article in a series of five on what the surveys revealed on the opinions from the community.

Research shows that when someone has a place to sit comfortably, more time is spent in the stores, and, consequently, more sales are likely to be made. Whether it is the shopper sitting for a spell or the husband calmly sitting while the wife shops, the benches are a good retail investment. The black metal benches that are slowly appearing downtown and in some other spots around town are sometimes purchased by Main Street Guymon, some are bought in memory of a person, and others are purchased by a company and placed downtown.

The logo of the company that purchased the bench is generally the back cut out. And those that are memorial benches have a gold medallion with the name of the person memorialized.

“We like these benches because they are comfortable, sturdy, and look really good with the new light posts downtown,” explains Design Committee Chairman JuliAnn Graham. “We appreciate the City Parks Department for anchoring the benches into the sidewalk for us. They’ve been very helpful.”

The benches are ordered from the Oklahoma Department of Corrections and cost $492 to Main Street member businesses and $542 to non – members. Ninety – three percent of those who took the survey like the benches and flower program.

Another high on the list of appreciation with the community is the Main Street Transformers youth mentoring program. Each year, a maximum of ten freshmen or sophomores are accepted into the program. They meet one Saturday morning each month and have field trips, volunteering, and other activities that help them to learn more about themselves and their community. To be invited back into the program the following year, a Transformer is required to have a community project that they plan and implement themselves. The project is something that addresses an issue important to the Transformer and is helpful to the community.

“Taos McIntyre,” says Transformer sponsor and board chairman Kristine Scott, “is very good with computers and using technology and his project has been to help local businesses get a better position on the internet. He knows the importance of being in Google to gain business and he has, at no cost, taken his laptop into businesses the past three years and gotten them set up.”

What is easy for the young McIntyre isn’t always easy for the business owners and this is a benefit to them. So, McIntyre’s project falls within the priorities of Main Street Guymon and is a project that he feels strongly about and is good at doing.

“The problem we have with the Transformers,” explains Main Street Director Melyn Johnson, “is getting the word out to the kids and getting applications. Then as the students get older and more involved in school activities, jobs, and sports, it can be difficult for them to find time to meet. We always stress that school and families take precedence over Transformers and we know that is right, but it makes it hard on scheduling at times.”

For a time, Transformers was sponsored by Manny and Susan Barias and then by Seaboard, but at present there is no sponsor. On the survey, 80% like the program and 2% were not aware of it. Only 9% said they didn’t think it was important for a Main Street program.

“In my opinion, this is a program that we need to put a little more energy into,” says Johnson. “Working with the youth and helping them find their place in the community and in life is always crucial. We have given a small scholarship to the Transformers who have stayed with the program until they graduate and to continue. we really need to find another sponsor. One of the great parts is how involved the Transformers get in the Main Street events, become excellent volunteers for us.

“The Aggie Families program is one that has no cost other than time to continue. Through it our volunteer numbers continue to grow tremendously. Each time we weigh the programs we keep or start, it’s our goal for the partners and Main Street Guymon to benefit equally. The volunteer growth is the main benefit for us, but what it garners for Oklahoma Panhandle State University and its athletes is support and participation. The families find a new friend and often, as family, get into the games free of charge. And it’s fun for most everyone. It’s a win – win – win program and the family and athlete go into it giving as many hours as they’re willing. There’s no requirements to meet.”

The personal impact some of the players and families have made are amazing. The impact of the athlete’s assistance in the Main Street programs is breath taking. “When you have 25 to 80 college football players helping with the community clean – up,” laughs Johnson, “some serious work gets done. When you have the college baseball team painting the bathroom at the park, it’s done in a really short time. You don’t even need ladders!”

“In our Main Street trainings,” Johnson says, “the topic on how to get the local university population involved in the community is often discussed. Most students who are from out of town know where the local fast – food restaurants are and the local large discount store. They often don’t find the unique locally owned and operated small businesses. When they become a part of the Main Street program, they are often introduced to more of these and are introduced to local events that they would not have attended before.”

The OPSU baseball team has worked the Guymon Fiesta for several years as Main Street volunteers. There are a good number of Spanish speaking players on the team and this is a perfect match for them and for the event. They have fun and we have more than 20 volunteers working the entire day. The same team provided the servers for the award – winning Main Street Pangaea dinner.

The OPSU football players have been volunteers at Outback, at the Silent Auction, and other events and programs. And each time someone comes in as a Main Street Aggie Family, it builds the volunteer base for the organization as some of them become involved in other programs.

For those who completed the survey, 74% think the Aggie Family program is good and 3% are not fans of the program for Main Street Guymon.

One comment from the survey takers was, “Getting your knowledge, drive, and involvement exposed as much as possible to the youth and schools benefits not only our children, but the future of Guymon. More programs or experiences like Transformers would be great. Try and aim to reach diverse cultures at the same time. You are doing great. Keep it up.”

“The bottom line on Transformers and Aggie Families,” says Johnson, “is that the Main Street Guymon Board of Directors believe that if you want to be involved with the community and make a difference, it is important, if you can, to be a participant with the youth. They are the future of the community and, thus, part of our future. We need to do this while still remembering that our first priorities as a Main Street organization are the businesses and historical preservation. We can sometimes be more effective when partnering with organizations, like OPSU and the YMCA, who have youth as a top priority.”

The past six years, Main Street Guymon sponsored a mentoring program called Cassie’s Kids that matched mentors with junior high aged girls. The program was run by Cassi Jo Schriefer who recently moved away. Her two mentees that she enjoyed working with for the past six years are graduating from high school and she is moving, so this program was taken off of the strategic plan for 2019.